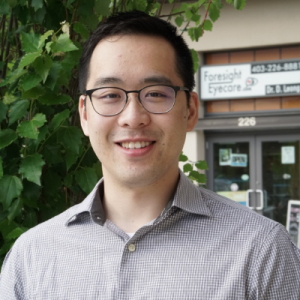 What is Myopia? What is the progression? At what age does it begin and when does it stop progressing?

Why is the progression of myopia a health concern?

The progression of myopia is a health concern because higher levels of myopia increase the risk of getting complications such as retinal detachments and myopic retinopathy (damage to the retina). The complications are mainly due to the lengthening of the eye. The lengthening of the eyeball can cause the tissues in the inner part of the eye to become stretched and the more stretched they are, the more likely they are to rip and tear. Some research papers may suggest that there is “no safe amount of myopia” and they are correct in a sense; since any amount of myopia will increase the risk of getting a complication.

However, the risk does not begin to get significant until a prescription of -6.00 needs to be prescribed. A large reduction in the risk of complications can be gained by controlling the progression of myopia early so that the -6.00 threshold is not passed. A study done in 2012 by Progress in Retinal and Eye Research suggests that by preventing the progression of someone with a prescription of -1.75 to -6.00 will reduce their risk of getting a retinal detachment by 8 times.

At what age should you start controlling the progression of myopia?

The control of myopia progression can begin at any age and it can be done outside of an eye clinic. Many research papers point to exposure to outdoor sunlight as a major factor in reducing the risk of myopia progression. Spending at least 90 minutes outside per day has been shown to reduce progression. However, that alone may not be enough and if myopia is detected during an eye exam, then other methods can be used. In a clinical setting, the main method of controlling myopia is by using special glasses that are prescribed by the doctor. These glasses differ from regular glasses in that they have only a small area of the lens where it is clear to look through, the rest of the lens is stronger and therefore not clear to look through. This principle is called “peripheral defocus” and is the mainstay of many myopia management therapies.

What are Ortho K lenses and how does it control myopia?

Ortho K (OK or orthokeratology) lenses began as a way of giving clear vision without glasses. They can be compared to dental retainers in that they shape the surface of the eye and reduce the focusing power to better match the length of the eyeball. It does this by flattening the surface of the cornea when they are worn overnight. When the cornea is flattened by the lens, it moves tissue away from the center of the cornea and towards the sides. This creates another situation where peripheral defocus is used to our advantage. The extra tissue at the edges focuses light more and therefore is at a higher power than the center of the cornea. This is very much the same principle as in the glasses that are described above.

If your child is too young for contact lenses then glasses can be prescribed until they are old enough. But how old is old enough? There is no research that points to a specific age where it becomes easier to wear contact lenses. If anything, it is best left up to the parents to decide what time is best. As long as both parent and child understand the extra responsibilities in wearing contact lenses then it would be fine to go ahead with contacts no matter the age.

What lifestyle changes can be made to lower the progression of myopia?

Research suggests that at least 90 minutes of outdoor time each day is significant in preventing the progression of myopia. It is important to note that it is not only exposure to sunlight that is important, but it is also the fact that the time spent must be outdoors as well. Sitting by the window on a sunny day has no effect on the progression of myopia. “Keep myopia at bay, go outside and play” is a good saying to go by.

I have heard myopia being called an epidemic. Do you think so? And if so, why is the prevalence increasing so dramatically?

I might not use the word epidemic to describe the current rates of myopia since that term is usually reserved for infectious diseases. However, I do agree that the rates are on the rise significantly from 20 years ago. Currently, about 30% of the world’s population is affected with myopia. It is predicted that by the year 2050, about 50% of the world’s population will be affected with myopia. Not only is the number of people being affected increasing but also the age at which myopia begins is decreasing. In 1983, the average age for the onset of myopia was 11. Now, the average age has been reduced to 8.

There are many theories as to why myopia is becoming more prevalent, but researchers theorize it is our environment that is causing it. Throughout history, humans have shifted from a farming based society to one that works in factories and office buildings. After the industrial revolution, the visual system has just adapted to the visual needs in our lives and thus has become more nearsighted. Nowadays, with so much time spent on iPads, cell phones and laptops, it is reasonable to assume that the visual system is becoming even more “specialized” to our visual environments by becoming even more nearsighted. This is why I think the best way to start reducing the risk of myopia progression is just to modify the visual environment that you live in. Go outside and enjoy the sun. I know that is easier said than done on some winter days but Calgary gets lots of sun every year so there is plenty of it to go around.