As January marks National Glaucoma Awareness Month, this post is intended to stress the importance of early detection of glaucoma. Glaucoma is a group of progressive ocular disorders that cause damage to the eye's optic nerve, which can be a precursor to loss of central vision and eventual blindness. When not treated, the disease often initially results in vision loss in the periphery of the visual field until it eventually results in total blindness. It is thought to be the primary reason for preventable loss of vision and statistics show that over sixty million individuals around the world are afflicted with the vision threatening condition.

Glaucoma is especially threatening because unlike other causes of vision impairment, it is an asymptomatic condition until irreparable damage is done. It is for this reason that glaucoma has acquired the nickname the "sneak thief of sight." This may leave you wondering: how does one safeguard against a condition which has no obvious symptoms?

Prompt diagnosis of the disease is the key to effective care. Although everyone may be at risk for glaucoma, particular populations are more at risk than others. Risk factors for glaucoma may include anyone over 45 years old, individuals having a family history of glaucoma, individuals with diabetes, or known eye conditions such as high intraocular pressure.

An effective way to detect glaucoma is to contact an eye doctor. There are several diagnostic eye examinations employed to assess damage to the ocular nerves caused by glaucoma. Particularly if you are 45 or older or have one of the other risk factors named above, you should schedule a routine eye examination at least once a year.

It is unfortunate that for the most part glaucoma cannot be prevented. That being said, the damage to the optic nerve and deterioration of vision may be halted by early diagnosis and proper treatment. Don't delay! Contact Foresight Eyecare now, for a yearly screening for glaucoma.

Please contact us with any questions you might have. If this is an eye emergency and it is after hours, please go to the nearest emergency hospital to get immediate assistance. 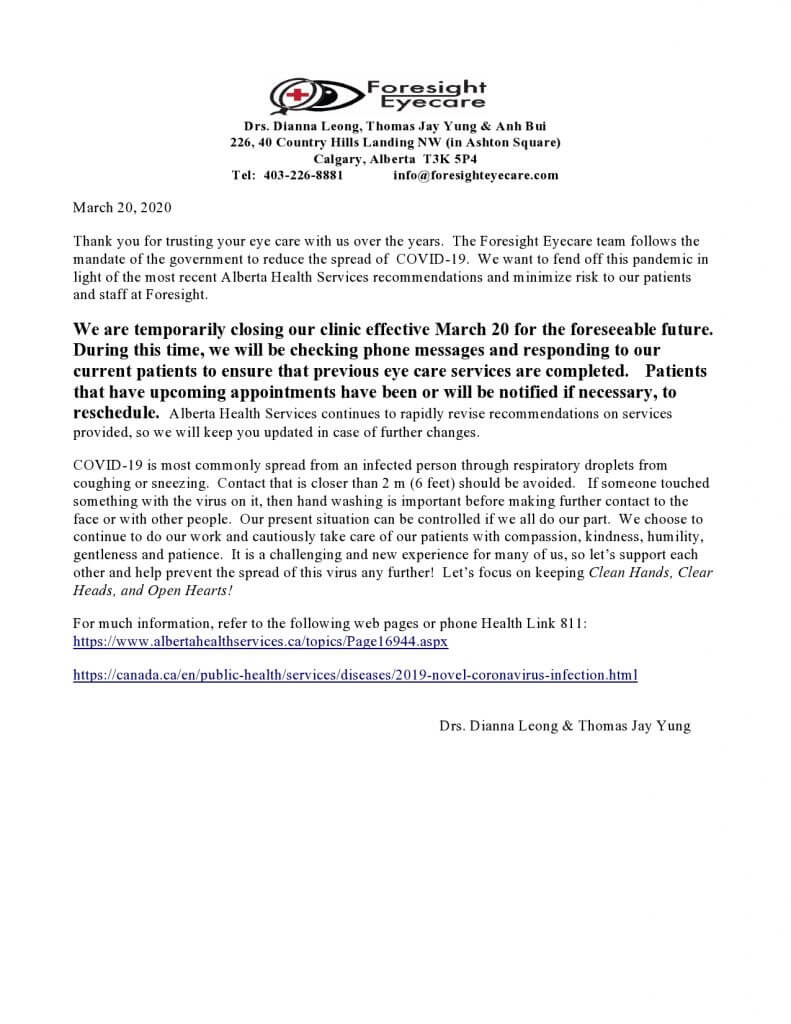 We are temporarily closing our clinic effective March 20 for the foreseeable future. During this time, we will be checking phone messages and responding to our current patients to ensure that previous eye care services are completed.

Patients that have upcoming appointments have been or will be notified if necessary, to reschedule.

Alberta Health Services continues to rapidly revise recommendations on services provided, so we will keep you updated in case of further changes.